Good quality results can only be obtained with good quality images. To obtain images with good SNR and high resolution, long scan times are often necessary. However, with longer acquisition, the subjects are more likely to move. Rather than acquire a very long sequence, that often can last up to 40 minutes, the acquisition can be broken into many shorter scans, each with lower SNR. These are coregistered, effectively reducing the effect of undesired movement, and averaged, for increase of the SNR (Kochunov et al, 2006). 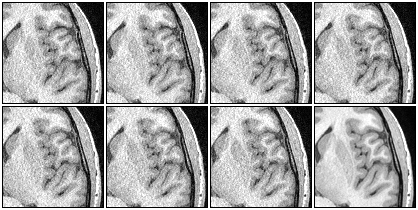 The last image in the second row is the average of all the other seven, after retrospective motion correction has been applied.

The results above are typical. Each pixel above corresponds to a true voxel, with no interpolation. Therefore, to see in more detail, simply download the image above and use an image viewer (e.g. gwenview or eog) to zoom.

The method is termed retrospective to discern it from prospective motion correction methods, such as those available for BOLD-sensitive EPI acquisitions (e.g. Siemens 3D PACE).

Since the images belong to the same subject and typically the movement is of only a few degrees or milimeters, the affine matrices for these corrections should have a diagonal with values very close to 1 and very close to zero off the diagonal. Here is one example:

As usual, the improvement in the SNR is given by a factor of

is the number of images averaged.

A script to apply the method is available here: stereomc. Just download and make it executable. Call it without arguments to obtain usage information.

FSL tools must be installed and properly configured.

Consider a set of

independent tests, each of these to test a certain null hypothesis

. For each test, a significance level

, i.e., a p-value, is obtained. All these p-values can be combined into a joint test whether there is a global effect, i.e., if a global null hypothesis

There are a number of ways to combine these independent, partial tests. The Fisher method is one of these, and is perhaps the most famous and most widely used. The test was presented in Fisher’s now classical book, Statistical Methods for Research Workers, and was described rather succinctly:

When a number of quite independent tests of significance have been made, it sometimes happens that although few or none can be claimed individually as significant, yet the aggregate gives an impression that the probabilities are on the whole lower than would often have been obtained by chance. It is sometimes desired, taking account only of these probabilities, and not of the detailed composition of the data from which they are derived, which may be of very different kinds, to obtain a single test of the significance of the aggregate, based on the product of the probabilities individually observed.
The circumstance that the sum of a number of values of

is itself distributed in the

distribution with the appropriate number of degrees of freedom, may be made the basis of such a test. For in the particular case when

, the natural logarithm of the probability is equal to

. If therefore we take the natural logarithm of a probability, change its sign and double it, we have the equivalent value of

for 2 degrees of freedom. Any number of such values may be added together, to give a composite test, using the Table of

to examine the significance of the result. — Fisher, 1932.

The test is based on the fact that the probability of rejecting the global null hypothesis is related to intersection of the probabilities of each individual test,

is not uniformly distributed, even if the null is true for all partial tests, and cannot be used itself as the joint significance level for the global test. To remediate this fact, some interesting properties and relationships among distributions of random variables were exploited by Fisher and embodied in the succinct excerpt above. These properties are discussed below.

The logarithm of uniform is exponential

is the rate parameter, the only parameter of this distribution. The inverse cdf is, therefore, given by:

is a random variable uniformly distributed in the interval

, and it is immaterial to differ between them. As a consequence, the previous equation can be equivalently written as:

, which highlights the fact that the negative of the natural logarithm of a random variable distributed uniformly between 0 and 1 follows an exponential distribution with rate parameter

An exponential with rate 1/2 is chi-squared

The cdf of a chi-squared distribution with

, and solving the integral we have:

In other words, a

is equivalent to an exponential distribution with rate parameter

The moment-generating function (mgf) of a sum of independent variables is the product of the mgfs of the respective variables. The mgf of a

The mgf of the sum of

distribution is then given by:

which also defines a

distribution, however with degrees of freedom

With these facts in mind, how to transform the product

by 2 changes the rate parameter to

and makes this distribution equivalent to a

The statistic for the Fisher method is, therefore, computed as:

distribution, from which a p-value for the global hypothesis can be easily obtained.

The details above are not in the book, presumably omitted by Fisher as the knowledge of these derivation details would be of little practical use. Nonetheless, the reference for the book is:

The Fisher’s method to combine p-values is one of the most powerful combining functions that can be used for Non-Parametric Combination.

In a previous article, a method to import cortical meshes from FreeSurfer into Blender and other CG applications was presented. Here it is complemented with a method to import the subcortical structures. These structures are segmented as part of FreeSurfer subcortical stream, and are stored in a volume-based representation. In order to import into Blender, first it is necessary to generate surfaces, then convert to Wavefront OBJ, and finally, do the import. Below is an example of how the output looks like. 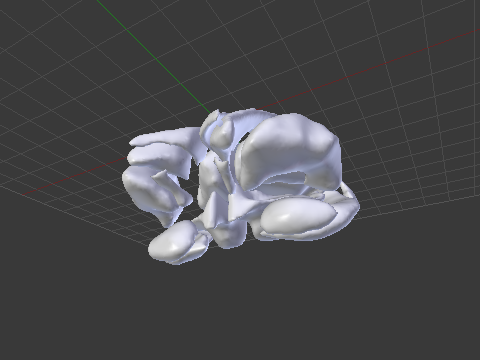 An example of a subcortical meshes generated from FreeSurfer subcortical segmentations imported into Blender.

Generating the surfaces for subcortical structures

The surfaces can be generated using FreeSurfer’s own tools. The script aseg2srf automates the task. Suppose you would like to create meshes for all subcortical structures of the subjects named “capitu”, “bentinho” and “ezequiel”. Simply run:

The outputs are saved in a directory called ascii, inside each subject’s directory. The script requires that FreeSurfer is installed and working properly, and that the environmental variable ${SUBJECTS_DIR} has been set to point to the location where the subjects are. It is also necessary to have writing permissions to this directory, so that the surfaces can be saved.

If there are many subjects, provide a list from a text file, with one subject per line:

To make surfaces for just some structures, provide their label numbers with the -l option. For the hippocampus, for instance, the labels are 17 and 53 for left and right respectively:

The script has also a -d option, for debugging, which allows to keep temporary files used during the mesh generation.

Below is a list of the label codes for the major structures. A more comprehensive list is in the aseg.stats file, inside the stats directory for each subject, or in the FreeSurferColorLUT.txt file (in the FreeSurfer directory).

Once the meshes have been generated, the process of conversion into a format that can be read by CG software is the same as described previously here.

The script is available here: aseg2srf.

FreeSurfer must be installed and working properly. The environmental variable ${SUBJECTS_DIR} must point to the directory where the data for each subject is located. It is also assumed that recon-all has been run successfully. 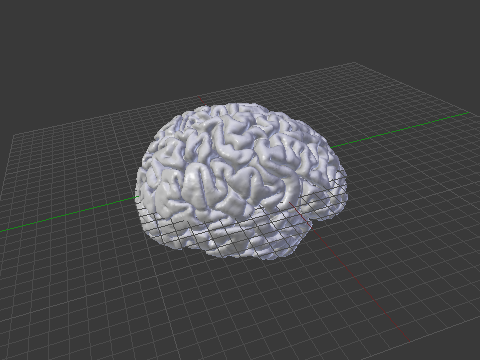