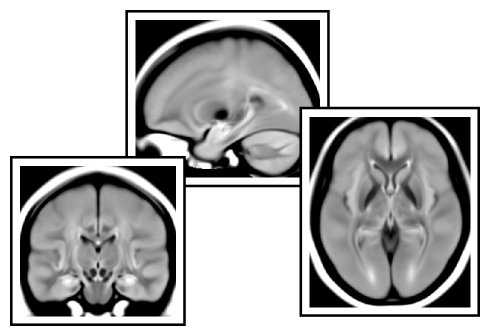 In this page you will find a set of brain templates constructed using fluid-attenuated inverse recovery (FLAIR) images, which can be used, for instance, to help to automatically identify white matter hyperintensities (WMH; e.g. leukoaraiosis, multiple sclerosis) from magnetic resonance images (MRI), or as target for registration of other individual FLAIR images without the need of a matching T1-weighted image, using software such as FSL and SPM.

Two versions are available, based on the full or on a restricted sample, each of these in three different resolutions (0.7 mm, 1.0 mm and 2.0 mm). The difference between the full sample and the restricted sample is that in the full sample, all subjects available at the time of the construction of the templates were used (N=853), whereas the restricted sample only subjects that presented none or the least volumes of white matter hyperintensities were used (see more details below). In addition to FLAIR, templates for gray matter (GM), white matter (WM), cerebrospinal fluid (CSF) and T1-weighted (T1) are also provided for both samples.

All templates can be downloaded in just one file, here: GG-all.tar (447 MB).

Information about the sample

Information about the MRI acquisition protocol

The images were acquired in either of two Siemens magnetom Trio 3 T scanners, one of these being a also Tim system. The aquisition sequences were:

Overview of the image processing

The templates were constructed as part of the pipeline described in Winkler et al. (2009) for segmentation of white matter hyperintensities. In short, the FLAIR and the T1-weighted images for each subject were coregistered to each other, corrected for magnetic field inhomogeneities, and normalised to the MNI template (from the Montreal Neurological Institute).

After normalisation, voxels belonging to the white matter were selected and used as reference for a global intensity normalisation, to ensure that all subjects would have similarly ranged intensities. The normalisation used only the central region of the image histogram, such that the effect of eventual lesions would have minimal or no impact on this step. The full sample template (N=853 subjects) was produced by averaging all the images, whereas the template with a restricted sample (N=366 subjects) used only those that contained few or no white matter hyperintensities.

If you use these templates in your research, please cite it as:

These FLAIR templates are licensed under the MIT License, the full text of which is below:

Permission is hereby granted, free of charge, to any person obtaining a copy of this software and associated documentation files (the “Software”), to deal in the Software without restriction, including without limitation the rights to use, copy, modify, merge, publish, distribute, sublicense, and/or sell copies of the Software, and to permit persons to whom the Software is furnished to do so, subject to the following conditions:

The above copyright notice and this permission notice shall be included in all copies or substantial portions of the Software.

THE SOFTWARE IS PROVIDED “AS IS”, WITHOUT WARRANTY OF ANY KIND, EXPRESS OR IMPLIED, INCLUDING BUT NOT LIMITED TO THE WARRANTIES OF MERCHANTABILITY, FITNESS FOR A PARTICULAR PURPOSE AND NONINFRINGEMENT. IN NO EVENT SHALL THE AUTHORS OR COPYRIGHT HOLDERS BE LIABLE FOR ANY CLAIM, DAMAGES OR OTHER LIABILITY, WHETHER IN AN ACTION OF CONTRACT, TORT OR OTHERWISE, ARISING FROM, OUT OF OR IN CONNECTION WITH THE SOFTWARE OR THE USE OR OTHER DEALINGS IN THE SOFTWARE.